Through Artisan’s voice, introduce world tradition and current work. “Artisan” for KUDEN is farmer, fisherman, craftsman…who create something with belief for their work. They carry on the tradition and technique , learnt from others and update it to current daily life or own style. 
For this time, first story of artisan insight, is interview with Italian fisherman lived Mondragone.
Irene, KUDEN’s staff, have an interview with him. It takes about an hour from Napoli , arrive at Mondragone where are famous for Mozzarella cheese. 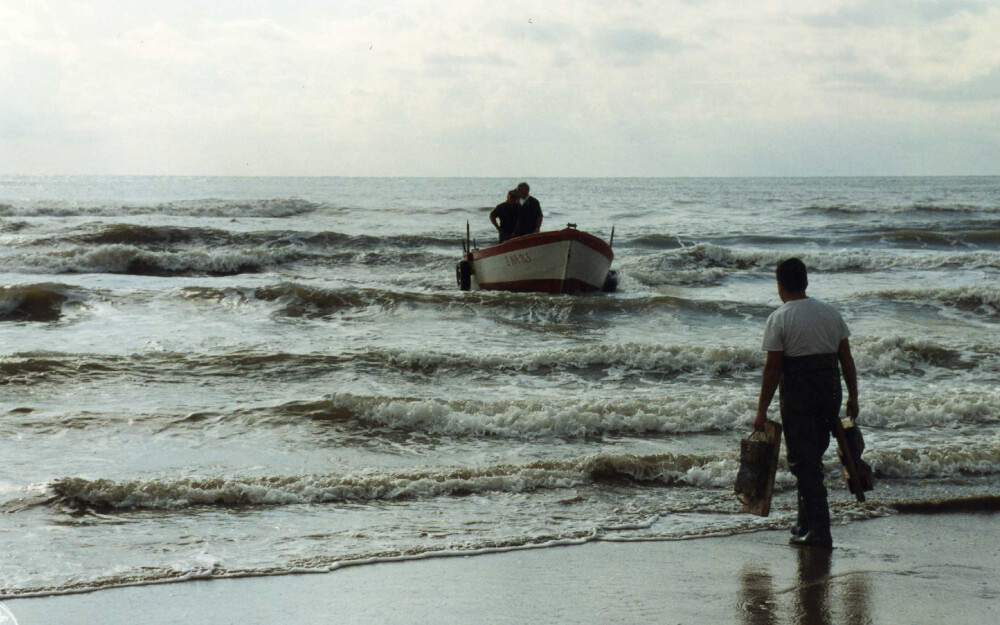 Giovanni Spinosa, fisherman in Mondragone for almost 80 years, tells us about one of the oldest professions in the world, with its traditions and changes over the years.

We spend most of our day at sea, going home only to rest or to eat. In the afternoon, around 2 PM, we go lay the net and at dawn we go back to cast it. Then, it’s time to do some sales at the fishmongers. Nowadays it is easier because everything is well- organized. In the past, the fisherman didn’t have a fixed routine. His day didn’t have a start or end time because everything depended on weather condition . At that time there was not TV, computer or any other media that could give us information about the weather. So we used the blow of the wind to figure out what the safest time to leave could be. It wasn’t a safe way, but it was the only one we had. I have risked my life a hundred times. Nature, you know, is unpredictable: now the weather is good and a moment later the wind direction changes and a storm comes. Unfortunately, once you are far at sea, going back is not easy and the only thing you can do is fighting to survive. The fisherman’s life is hard, his job requires a lot of sacrifices, but nonetheless I am happy because for me it is the most beautiful job in the world. 2, Why did you choose to become a fisherman?

I didn’t. You can’t become a fisherman, you can only be born as one. Mondragone has always been a city based more on fishing than on farming, where at least 500 families, out of about 15.000 people, had chosen the sea life. If your father was a fisherman, then you and after you, your children, were meant to be fisherman as well. I didn’t go to school. First of all because at that time it was a privilege, but above all because I started working with my father at the age of six. Mine was a large family, we were eight children, five boys and three girls, plus my grandma, who, being a widow, moved into our house. We were so poor that couldn’t even buy a piece of bread. We didn’t have a comfortable bed, but a burlap sack stuffed with corn leaves. Nor did we have a bathroom. We used a pitale (a sort of vase-shaped bedpan) placed under the bed. We really had nothing. My brothers and I used to go to work with my father because at the end of the day, the money earned were divided between the members of the boat. Even though our pay was cheaper because we were the youngest, for us it was fine because in that way my father was able to bring something extra home. Since we were poor, even a few extra coins were important for us. Moreover, the unsold fish was donated to people poorer than us, who would give us bread, wine, eggs, or fruit in exchange. 3, What does a fisherman eat?

We used to eat fish, although not every day. The choice was not as varied as today but we would feed ourselves with whatever we had because we were hungry. So, anything edible was good. During meals, a slice of bread was divided between eleven people, and it was so thin that through it I could see my brother sitting at the other side of the table. We would also eat bran, which helped us grow. And when my mom would cook, instead of oil she would use lard, a gift from animal-breeding families. Our way of eating was very simple. Today, however, the diet is more varied, we integrate also other types of proteins, but our staple food still remains fish.


4, The fisherman is an ancient job and it is connected with many traditions. Tell us about the most significant one.

Fishermen are religious people and the most important tradition is connected with their Catholic faith. The most significant one is the Madonna Incaldana's festival, dedicated to the patron of Mondragone. For this event, celebrated two days after Easter, fishermen have the chance to thank the Virgin Mary for her protection. On this day the fish sale has no personal gain, but it is a way to show devotion and gratitude from the fishermen. All the fish caught is sold at auction and the proceeds is used to organize the party. Music, colored lights, local food and wine, are the main background of this special event. He took part in auction


5, Are the past traditions still continue?


Yes, of course. There are no longer as many fishermen as before, but the few left keep carrying on what was started a long time ago. Those traditions are very important for us, handed down from father to son to last forever. 6, Compared to the past, what are the sea condition today? In order to protect the marine environment what do you pay more attention to?

The sea today is much more polluted than in the past, not because of fishermen but because of globalization. Actually, to be honest, we were not so careful about contaminating the sea or not, because we had absolutely no idea of the damage we could cause to the environment. I have started to understand my mistakes after meeting a famous doctor, one of the richest in Naples. I remember he had three ships with which he traveled the world. He loaded the goods in Naples and unloaded them in Russia, America, and Japan. He had respect for me and we were good friends, so much so that on one occasion he invited me to a party on his private yacht. It was huge! There were fourteen cabins, a kitchen with three cooks, and the guests were well-educated people, politicians and doctors from the best hospitals of Naples. On board there were bins for recycling and everyone was very careful about where to throw away the garbage. If I had ever dared to throw a bottle into the sea, all the people on that ship would have become my worst enemies. It was thanks to those people, but in particular to my friend, that I began to understand what the respect for the environment was. 
7,What has changed between the fisherman of the past and the one of today?

When I was young, fishermen were much closer. There was respect between us, a sense of community and brotherhood. We were like a family. Once done with the sale, we would eat together and sometimes we would sleep on the beach waiting for the return of the last boat. No one went back home without being sure that everyone was safe. Moreover, when it happened to have earned a bit more than the day before, you helped someone who was less lucky than you. At that times, it worked that way. Today it is different. People are jealous, selfish, and everyone wants to be better that the others. There is no sharing anymore. People are not satisfied of what they have, they want more and more, and they all think about themselves. The cause of that is too much wealth, enjoyed from most of the people today. It is a wealth that has certainly improved people’s living but at the same time ruined the soul of mankind. 
What the voice from an artisan who continue to work for same job in 80 years leaves on your heart? If you have something message us and contact to writer Irene, please send us by contact form.

Looking forward to next Artisan Insight!